The Climate Denier’s Summer to Remember: A 2022 Ultimate Travel Guide

The Climate Denier’s Summer to Remember: A 2022 Ultimate Travel Guide

Look, we can’t all believe in the same gobbledygook as everyone else. What would we argue about at family gatherings? Misinformation and fact-denial is the spice of life, my friend! Besides, can we even prove that the sea levels are rising? I actually think so, but it’s sciency and complicated! And let’s say we are going to hell in a sinking handbasket. Are we sure that it’s a result of human impact? Lot’s of leading minds say yes, and they’ve even expertly explained it to us, but come on… who has the attention span for graphs? And forget seeing for yourself. Who has the energy to observe the “changes” that are “happening” over “time?” And even if we wanted to, it’s not like there’s a list somewhere with 5 top destinations to visit before they go. Until NOW. With my Ultimate Travel Guide for the Climate Denier, you can pack your bags and say ‘sayonara’ to some of the coolest places on Earth before they’re gone for good.

The Hiiiiills are aliiiiiive…for a little bit longer! Austria is a summer paradise for nature, art, and booze lovers alike. Celebrate the Summer Solstice with the townspeople of the Tyrolean Valley where cable cars will transport you to and from bonfires and barbeques on the longest days of the year. Sip-and-spit your face off in Weinviertel, Austria’s “wine quarter” that stretches from the Danube River in the south, to the Czech border in the north. Once you’re good and sauced, you’ll want to explore the hundreds of miles of hut-to-hut alpine trails that are open from June to September every year. My highest rec? Why Austria’s highest peak, of course: Grosslockner. Follow this gorgeous trail to The Pasterze Glacier, the longest glacier in the Eastern Alps. Fortunately, the length of the glacier is currently decreasing by about 33 feet each year, so if you travel in any month other than February you may catch some stunning waterfalls as the glacial melt runs down the mountain valley.

Bienvenido a Miami! With direct flights from almost anywhere in these Great United, Miami is a no-brainer for a quick beachy getaway. But Miami isn’t just for tanning and filling your thong with sand. She’s more than big booties and South Beach. She’s artistic, she’s refined, she’s the home of the first Burger King. You won’t find another city as sloppy and sophisticated as Lady Miami.
Take a walk through the Wynwood District for mind-blowing art murals and mouth-melting tacos. Stroll through Little Havana for the best Cuban food even Cuba has to offer. You like gardens? Drop into the Vizcaya Museum and let yourself be transported to the gilded age.
And when you’re ready to hit the beach, there’s something for everyone. Plop yourself at the Lummus Park promenade for premo people watching. Wander along Ocean Drive and take in the power of the Art Deco architecture. Escape the crowds and take the Rickenbacker Causeway to Crandon Park, Virginia Key, or Key Biscayne.
Miami is located just a few feet above sea level, making her this editor’s pick for the perfect place to experience sea level rise first hand. Modest projections have the water rising by ½ to 1 inch per year just over the next decade. That may not sound like a lot, but when you live only 6 feet above sea level you’ll take every inch you can get. And with so many waterfronts to choose from, you really can’t miss it. So come to Miami where the heat is on. Like really, really on.

Few states encompass the ruggedness of the American West like Montana. Fly fish the famed Yellowstone River. Head out to Bozeman and take in the wilds of the Gallatin. And if you make the trek to Big Sky Country, there’s one must-do: Glacier National Park – a true wilderness where grizzlies, grey wolves, and mountain lions reign supreme. And fortunately, the park has become a hell of a lot more accessible in the last 50 years. Our grandparents could barely traverse the terrain on account of the 150 glaciers interrupting the trails. Only 26 remain (glaciers, not grandparents), freeing up much of the park for slip-and-fall-free trekking. A silver lining, I guess!

Draw me a picture of ‘relaxation’ and I’ll bet there’s a houseboat in it. Ain’t nothing more kick-back than lake life and a floating home. And you know what else is soothing? The landscape of the American Southwest. If you agree with anything I just said, then grab your water skis and get your tookus down to Lake Powell. The second largest reservoir in the US, Lake Powell is situated inside the Glen Canyon National Recreation Area. It covers over 250 square miles between southern Utah and northern Arizona. That’s beaucoup National Park Territory, if you didn’t already know.
With summer temperatures reaching 120 degrees fahrenheit in the high desert, we’ll be coveting that houseboat breeze and that reservoir mist. And I know I know, it’s a dry heat, but that’s kind of the problem… There’s been a bit of a drought since 2000. That’s over 2 decades if you’re as easily confused by time and numbers as I am. And by bit of a drought, I mean to say that the lake is shrinking faster than a salted slug. Powell is now 160 feet lower than it was 20 years ago, and water managers project it will reach “deadpool” levels by 2023 – that’s when there isn’t enough water to flow through the dam. If you wait much longer, your aqua vehicle’s access to shorelines will be denied on account of low water levels. You don’t want that, I don’t want that. Go now.

Australia. Not to be confused with Austria. Not that I’ve ever… nevermind. The Land Down Under! With endless wonders (some of them even wonders of the UNESCO World Heritage list), Australia never fails to capture our imaginations. Explore Uluru (formerly Ayers Rock), a sacred sandstone formation in the heart of Australia’s ‘red centre.’ Pay a visit to the Sydney Opera House, which if I’m to understand correctly, is a 45,000 square metre naturally occurring mollusk shell in the middle of Sydney Harbour. Shred gnar at the famously laid-back Bondi Beach in New South Wales. But if you want to see outer space here on Earth, The Great Barrier Reef is for you. Genuinely naturally occurring (cause I totally knew that the SOH was man-made), the Great Barrier Reef Marine Park stretches for nearly 1,500 miles. That’s about the distance from Miami to Maine, and it’s absolutely stuffed with all kinds of otherworldly marine life.
I’m closing the list with this trip because there’s some urgency here. Over the past 7 years the GBR has experienced 4 mass bleaching events. And I’m not talking about your boyfriend’s recent decision to ‘go blonde.’ I’m talking about the other very depressing phenomenon in which the coral at the base of the reefs turn white and can’t function as a viable source of food or shelter for the various animals that depend on it. The cause is two-pronged, and you can bet the seahorse that both are the result of human impact. When water temperatures rise, the coral gets stressed out and can’t metabolize properly. To make matters worse, the excess CO2 in the atmosphere eventually ends up in the ocean (aka the carbon sink of our planet). That extra CO2 turns into carbonic acid, making life for our little coral friends very uncomfortable.

So there you have it, a short list of a few of the most extraordinary locations on the planet. Consider it my gift to the modern Climate Denier for bringing that ‘Je ne sais quoi’ to the conversation that everyone else thought was based in cold hard science. You keep us on our toes, CDs, and we love you for it. 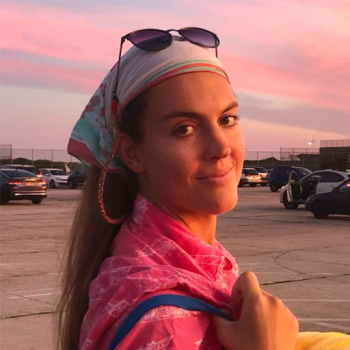 She surfs, she sings, she writes, she marches to the beat of her own drum and has the jiu jitsu black belt to back it up. Born in the deep south, living in deep Brooklyn, Calmese has a unique perspective on how we all live. She believes that at the end of the day we’re not all that different, and that deep down we all love nature, we just get a little confused sometimes about how to live that love, and how to treat mother nature right.

You see this drink right here? Here, friend, is the answer to all our problems.